Do we have finally found new physics with the latest W boson mass measurement?

If you are interested in particle physics, then you certainly heard about the most recent measurement of the W boson mass by the CDF Collaboration [1], which implies a seven sigma (!) deviation from the Standard Model prediction. Is this finally the sign of new physics, which we all have been hoping for? I fear not (yet).

I started to work on the W boson mass in 2012 and it took us more than five years to publish a first measurement based on data of the ATLAS Experiment [2]. When I applied for funding for this project, one of the referees wrote that "this measurement is too complicated to be done in time and hence (s)he would not recommend funding". Luckily for me the other referees disagreed and I guess I have to thank the DFG and the Volkswagen foundation at this point that they were willing to take the risk. I have another anecdote on the W boson mass measurement, which illustrates its difficulty: We observed for quite some time some features in the our data, which we could not explain. Once one of my PhD students came into my office and told that he finally figured out this feature: the protons in the ATLAS detector do not collide heads-on but under a very small angle, allowing the not interacting protons to continue their travel through the LHC on the other side of the experiment. Indeed he was right - we have not been considering this effect in our simulations, however - after some calculations and speaking to the machine experts - it turned out that this effect induces a feature in our data, which is opposite in sign that we observe; so we have been left with an effect that was twice as large and unexplained. In the end it turned out to be caused by the deformation of the ATLAS detector by its own weight of more than 7000 tons over time. Enough of my memories - I just want to say with this that the W boson mass measurement is a difficult business.

So let's start to look at the new CDF measurement. I just had a brief look, so all what I say needs to be taken with some caution. Clearly it is striking that CDF observes a 7 sigma difference to the Standard Model, which alone would be phenomenal. The main problem, however, is that the new measurement is in disagreement with all other available measurements. I think this could have been presented better in their paper, mainly because the measurements of the LEP experiments have not been combined, secondly because they don't show the latest result from LHCb. Hence I created a new plot (below), which allows for a more fair judgement of the situation. I also made a back-of-envelope combination of all measurements except of CDF, yielding a value of 80371+-14 MeV [3]. It should be pointed out that all these combined measurements rely partly on different methodologies as well as partly on different model uncertainties. The likelihood of the consistency of such a (simple) combination is 0.93. Depending (a bit) on the correlations you assume, this value has a discrepancy of about 4 sigma to the CDF value. So I do not think, we have to discuss which new physics could explain the discrepancy between CDF and the Standard Model - we first have to understand, why the CDF measurement is in strong tension with all others. 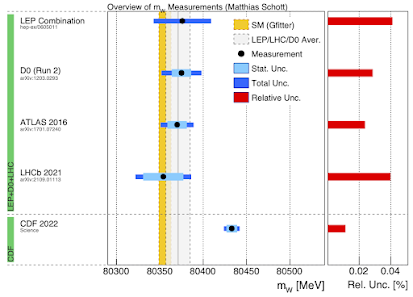 Comparison of the CDF measurement with the most precise other W boson mass measurements. The Standard Model (SM) prediction is based on the Gfitter Programm (https://arxiv.org/abs/1803.01853, https://arxiv.org/abs/0811.0009)
In fact, there are certainly some aspects of the measurement which need to be discussed in more detail (Sorry, now follow some technical aspects, which most likely only people from the field can fully understand): In the context of the LHC Electroweak Working Group, there are ongoing efforts to correctly combine all measurements of the W boson mass; in contrast to what I did above, this is in fact also a complicated business, if you want to do it really statistically sound. My colleague and friend Maarten Boonekamp pointed out in a recent presentation [4], that the Resbos generator (which was used by CDF) has potentially some problems when describing the spin-correlations in the W boson production in hadron collisions. In fact, there are remarkable changes in the predicted relevant spectra between the Resbos program and the new version of the program Resbos2 (and other generators) as seen in the plot below. On first sight, the differences might be small, but you should keep in mind, that these distributions are super sensitive to the W boson mass. I also attached a small PR plot from our last paper, which indicates the changes in those distributions when we change the W boson mass by 50 MeV, i.e. more than ten times than the uncertainty which is stated by CDF. I really don't want to say that this effect was not yet considered by CDF - most likely it was already fixed since my colleagues from CDF are very experienced physicists, who know what they do and it was just not detailed in the paper. I just want to make clear that there are many things to be discussed now within the community to investigate the cause of the tension between measurements. 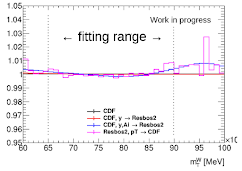 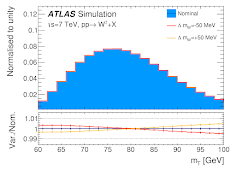 And this brings me to another point, which I consider crucial: I must admit that I am quite disappointed that it was directly submitted to a journal, before uploading the results on a preprint server. We live in 2022 and I think it is by now good practice to do so, simply because the community could discuss these results beforehand - this allows a scientific scrutiny from many scientists which are directly working on similar topics.

Let's not end this comment without two positive thoughts: The experimental part of the analysis is very beautiful. You cannot imagine the amount of work that is necessary to understand your detector with the precision as the colleagues at CDF do. And my last thought: Even if the CDF measurement is too large by 30 MeV and even if the uncertainty is in reality 30% larger, then the new world average would be something like 80386 MeV and a total uncertainty of 9 MeV with a decent consistency of all measurements. And this is still about three sigma from the Standard Model value - so it is certainly worth to look at the W boson mass in future!

at April 07, 2022
Email ThisBlogThis!Share to TwitterShare to FacebookShare to Pinterest

I lately got bored writing funding proposals, so I decided to write a bit about things of which I am currently thinking. This blog is therefore mainly for myself; after all it helps to sharpen thoughts when bringing them to paper (or to html for that matter).